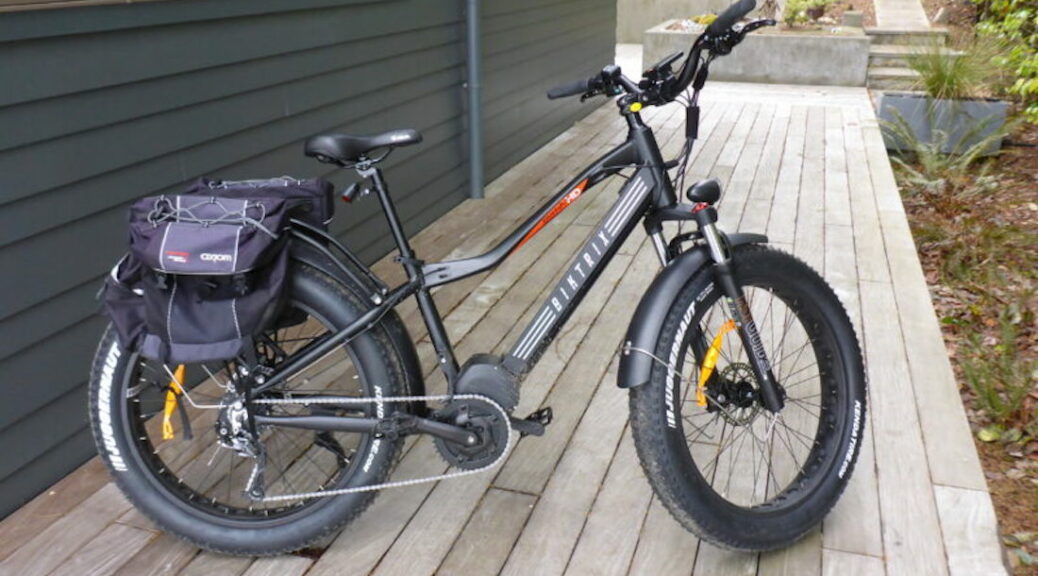 Last April, some EV owners on Cortes Island held an “EV Faire” at Manson’s Hall; they brought their vehicles to show and discuss, and giving test rides to some attendees. Coverage of this event focussed on the big shiny cars; but there are actually more e-bikes than e-cars on Cortes Island, and I felt the bikes didn’t get enough page space.

I therefore asked e-bike owners to contact me if they would like to be interviewed, so I could profile them and their bikes. The first three respondents all had quite different bikes, so this article has three sections, one for each bike:

“Best of Both Worlds” — Biktrix e-bike

I interviewed Mark Spevakow at his home on Smelt Bay. He and his partner Shana own two ebikes — both “Juggernaut” models by Saskatoon company Biktrix.

Biktrix manufactures their bikes using parts from various sources:  the frame is from Taiwan, the motor from China, and standard Shimano parts are also used. On this bike, the motor is not in a wheel hub but instead in the pedal hub.  This brings the centre of gravity back towards the middle of the frame, which Mark feels is helpful when riding on dirt or gravel.  (Automatic sensors in the geared hub cut power to the drive train when the rider shifts gear, to protect the mechanism.)

Mark got his first e-bike in 2016 and has watched the market carefully since.  He’s an avid mountain biker and does a lot of trail and beach riding. He bought these bikes specifically for riding on Cortes, mostly off-road.

“I love e-bikes.  It’s actually addicting!  I went for a 45-minute ride, came home, and I still wanted another one.  In just 35 minutes I can ride a third of the island — much more range than on my MTB.  And I can decide how much workout I feel like today.  It’s the best of both worlds.”

The manufacturer offers various “levels” of e-bike build. The variables are mostly the motors (which vary in torque and build quality) and the batteries. This bike has a throttle, which on Mark’s model has 5 levels of assist; an extra-cost option is a more finely graduated control with 9 levels. The bike can be pedalled unassisted, or with max assist selected it can be ridden like a scooter, with no pedalling effort.

This is a fat-tyre bike, which Mark appreciates.  Various tyre sizes are offered by Bitrix;  customers can request standard MTB tyres.  Tyre pressure (on the fatties) is usually 20-25psi for street use, which makes for a pretty comfortable ride on our potholed roads and rough trails.  Tyres can be deflated to 15psi for trail riding and 8psi for use on beaches and snow.  Mark says he feels comfortable on most surfaces except ice;  “ice is just too scary.”

Price varies a lot depending on the battery and motor options.  The bike starts at about $2000 CAD, which includes shipping.  Mark and Shana chose a more powerful model with a price tag of about $2800, because our steep hills made them want more range and torque. Lights are included in the purchase price, with an auto-on feature that lights the bike up at dusk.

The controller configuration can be customized (shift points, torque curves etc) for the rider’s personal preference.  Configurations can be saved and shared, and are available for download from Bitrix and the user community.

Unfortunately Bitrix does not (yet) offer regenerative braking.

Bitrix bikes are typically rated to carry 300lbs including rider, and a luggage rack rated for 50lbs is a free option at time of purchase.  Mark feels that the bike is not well suited for the very tall or very short rider — it fits best if you are between 5’5” and 5’11”. For those who like to wear skirts or don’t feel limber enough to throw one leg over a tall frame, Biktrix does offer a step-through frame model, the Stunner.

Is there anything he doesn’t like?  Well, the brakes are a bit feeble, “barely adequate” in fact.  Beefier brakes are an option he wishes he’d selected.  But he loves the bike overall: “It lets me maintain a relaxed upright posture, even up a steep hill, which helps to avoid back strain or re-injury.”

Mark does most of his riding for pleasure, on trails and beaches. But his bike could easily get him to the Co-op or other island stores, and back home with a load of groceries.

“A Trip to Manson’s Is Hardly Noticeable” — the Tern

Patti Macaulay of Bartholomew Road bought her Tern e-bike in late March of 2019 from Citrus Cycles in Ladysmith.  “I bought it by mail order!” Her very first trip was a doozy: she rode the bike home from Campbell River (where it had been drop-shipped) to Cortes Island.  “I only lost 1 bar on the battery meter when I arrived at my cabin.”

This cargo/utility e-bike delivered on its promise of extended range. The recharge time is a bit longer than she expected, but on the other hand the bike seldom needs recharging because of its impressive range.  “A trip to Manson’s is hardly noticeable.”

Patti was involved in permaculture in Calgary and had visited Cortes for a couple of years before moving her;  her cousin lives on the island.

“It was a conscious choice to own a bike rather than a car. I didn’t want to come here and pollute the island.  I want to have a composting toilet and a gray water system and a zero-emission vehicle.”

This is not Patti’s first e-bike.  When she decided to move to Cortes she bought a low-end Daymak, one of many cheap Chinese e-mopeds on the market.  The battery technology was old and it didn’t have much power.  But her daughter is still riding it for casual errands.

The Tern was expensive, but she compares it more to buying a car or motorcycle than a regular bicycle.  It’s a vehicle, not sporting goods.  The bike, hand-made in Ladysmith, costs $5200.  With the $1000 battery and a couple of extras she ended up paying about $7300.

However, she uses it regularly as her primary vehicle, and figures the cost savings in petrol and insurance (vs owning a car) should offset the bike purchase cost within a couple of years. The bike has a range of 150 miles on flat ground in optimal conditions.  She uses it regularly to go to Quadra.

“No forty dollars for the ferry, no line-up, I’m guaranteed to get on.”

The Citrus Tern has no throttle, but four levels of assist can be selected:  Eco, Tour, Sport, and Turbo.   Assist can be turned off (and will turn itself off if speed exceeds 32 kph).  But basically, Patti says, you have to pedal;  your range will shrink if you don’t.  There is no regenerative braking

The bike weighs 71lbs — “Red Granite Road is a killer!” — and is rated for a total payload of 400 lbs including rider.   So this bike is not easy to push around (into a tight parking space for example), but it does come with a handy “walking assist” mode.  This makes it easy to push it uphill at 3-4 kph, with the motor helping you.

The wheels are small, which makes it a little twitchy on rough surfaces.  Patti would not recommend it for trail riding, despite the puncture-proof tyres;  it’s a road vehicle.  The derailleur and chainring are fairly close to the ground — not much clearance.

The bike can be adjusted to fit riders of widely varying stature;  Patti is fairly short, but finds it quite comfortable.

The Tern comes with a limited lifetime warranty.  The batteries are LiOn, rated for 1000 charge cycles.  How do they perform in cold weather?  “I haven’t really noticed a big difference between cold and warm weather.”

“I’m Not Really Feeling Any Need For More”: Yajie E-Scooter

Josh Foisey of Whaletown had only had his Yajie electric scooter about a month when I interviewed him.  The model is an Armada Recon which he purchased from the White Tide e-vehicle store in Campbell river for $2500.

“This is my primary means of transport.”

It’s not Josh’s first e-scooter.  He had previously owned a Vespa-style e-scoot (“I bought it used, it was already pretty thrashed.”)  Nevertheless, he could see the potential and decided to get a new one.

The Yajie e-scoot comes with a one year warranty, and White Tide is also a service centre for the brand.  “I had one issue, and they fixed it.”  He would recommend White Tide to other Cortes Islanders;  they “don’t have much bedside manner,” but they stand behind their products.

Josh gets about 30km on a charge, on Cortes roads. Even if totally flat, his battery is always topped up by morning if he lets it charge overnight. It costs him only $4 to get on the ferry, and he can easily travel to Q-cove and back.

“The pedals are a joke, you could never really pedal it.”

A vestigial crankset makes the scooter technically an e-bike, therefore not subject to licensing and ICBC.  But Josh laughs, “The pedals are a joke, you could never really pedal it.” The brakes are great, the lighting not so great.  “You can get a cargo rack, but I just use my backpack.”

Can you ride in the rain?  “Yes, it works great, the waterproofing is pretty good.”  The small wheels are a little twitchy and the suspension “kind of bouncy”; dirt roads are fine, but he wouldn’t take it into the bush.  It does have a reverse gear which makes parking easier.

Range is an issue. When Josh was working near South Point, but living near Carrington Bay, the commute was a real challenge. “It was the worst possible commute on the island!” — and he felt the Yajie was barely up to the task.  “Sometimes I wasn’t sure if I would make it home.”

Nevertheless, is he happy with his purchase?  Yes.  He’d like a bigger cargo rack, though.  “The only complaint I have is a lack of storage.”

“This is my primary means of transport, and I’m not really feeling any need for more.”  If Josh needs to make a longer trip, for example to catch a plane, he says he can always use public transport, ride with friends, or hire a taxi.

Whether for pleasure riding, casual errands, or a primary vehicle, E-bikes have a lot to offer on Cortes Island. I hope to profile some more brands and models (and owners) in a followup article. If you would like to be interviewed about your E-bike or E-scoot, please get in touch!